Copa90 is teaming up with Facebook on this year’s Facebook Football Awards. As part of the partnership, Copa90 has created animated video promos to run worldwide.

The annual Facebook Football Awards, which first launched in the UK last year, gives football fans the chance to vote for the season’s top performers.

Copa90 has created three animated videos to promote the Facebook Football Awards, one for the UK, Germany and Spain. Each of the films highlights the key categories fans can cast their vote in. The videos are short animations in the style of super hero comics, telling the stories of the teams and players nominated for the awards. 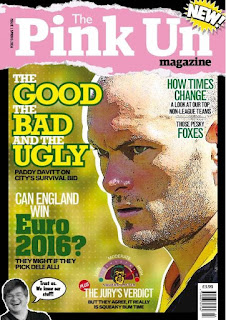 Archant has expanded its media portfolio with the launch of the Pink ‘Un Magazine – a new regional sports magazine. This follows the success of the heritage brand The Pink ‘Un – which currently exists as a weekly newspaper supplement in the Eastern Daily Press and online.

The first issue will be available on April 30 and launch advertisers include Norwich International Airport, regional motor dealer Holden and construction specialists Ovamill.

The Pink ‘Un Magazine is a punchy new title for Norwich sports fans to reflect the true voice of the local sporting community. The magazine launch comes off the back of the success of The Pink ‘Un – a dedicated football supplement and online product focusing on news and match reports. It is currently enjoyed online by over 140,000 loyal fans, generating over 2.5 million page views monthly.

The Pink ‘Un Magazine will feature behind the scenes sporting content, local profiles and opinions to offer a richer 360 degree look at regional sports across Norwich.
Archant Facebook Football Awards The Pink ‘Un

“Controlled acceleration”
As the communications and marketing worlds continue to converge,  the challenge for independent mid-size agencies will be how to continue to scale in response to the global needs of a dynamic client base.
Integrated, specialist services continue to be critical in delivering value-added services to clients, but to do this outside the US, agencies have to make bold choices in terms of what business verticals and horizontals they can leverage across geographies successfully.

July 19, 2017
In part one of a two-part series, Mark Blair, VP of EMEA at Brightcove, explores the unique value of live streaming video, how to use it to communicate with external audiences and how it can the benefit your business Live streaming video is gaining more widespread use across enterprise organisations. Its use isn’t new. Corporations [more ]
http://bit.ly/2vCngsg
Read more